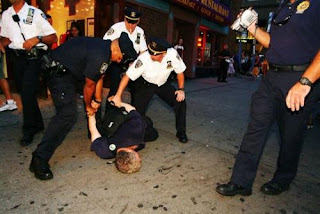 Those of you who live in New York are no doubt familiar with the right-wing drift of the police department since the 2001 terrorist attacks on the World Trade Center. Some of you may be familiar with the Handschu litigation. A consent decree, negotiated in 1985, ostensibly ended the 1971 lawsuit which had accused the NYPD with harassment of political organizations by the NYPD’s “Red Squad.” From ACLU’s web site, “The case began as a challenge to various police practices that involved the maintenance of dossiers on political activists and the use of various undercover and surveillance techniques to monitor the activities of political organizations and individuals. The case was settled with a consent decree entered in 1985, in which the Police Department was prohibited from investigating political and religious organizations and groups unless there was "specific information" that the group was linked to a crime that had been committed or was about to be committed. The decree also established a system of record-keeping and procedures for approval of investigations by a three-member body, called the Handschu Authority. The system was designed to create a "paper trail" in order to ensure against abuse.”

In 2002 the NYPD sought modification of the consent degree asserting that the changed global circumstances in a post 911 world warranted a loosening of the terms of the decree and favored granting the police more latitude to conduct surveillance to thwart the evil terrorists who were at that very instant plotting to destroy various New York landmarks. On February 11, 2003, the same Federal District Court court that crafted the original decree approved modifications to the agreement conditioned upon the Police Department developing new guidelines consistent with those developed by the U.S. Department of Justice for investigations conducted by the F.B.I. The Police Department’s modified guidelines were accepted by the District Court on April 8, 2003. (Doesn’t that make you feel safer? The NYPD had merely to meet the FBI’s standards for protecting American’s civil liberties. Makes you wonder about their prior standards).

Rather than the NYPD going out and rounding up actual terrorists, they used their newly expanded power almost immediately to begin spying on political protests and Critical Mass bike rides. During anti-Iraq war demonstrations in February and March 2003, the NYPD employed certain "debriefing" practices in which arrested protesters were subjected to inappropriate interrogation into their past political associations. The NYPD’s conduct prompted the judge to make the NYPD’s own guidelines a part of the decree, thereby rendering the NYPD bound to follow its own internal regulations; something that under developed municipal law the department is ordinarily not required to do.

Despite these restrictions, the NYPD continued its unlawful activities by engaging in photographic and video surveillance of protestors during the Republican National Convention and during the monthly critical mass bike rides. The NYPD’s clear violations of its own rules necessitated a trip back to Court which brings me (finally) to the subject of today’s post.

Several weeks ago Judge Charles S. Haight Jr. issued a blistering 47 page decision threatening the city with contempt if it again violated its own guidelines by videotaping or photographing political protestors without some evidence that a crime was to be committed. He noted that he originally made the guidelines part of his 2003 Order modifying the decree, “after senior N.Y.P.D. officers misbehaved themselves by ordering that arrested protesters held in precinct station houses be interrogated in inappropriate ways before being released.” As for the guidelines themselves, they require that before the police would be allowed to record people at public gatherings they would have to show that some unlawful activity might occur and they would still be required to apply for permission to the deputy police commissioner in charge of the Intelligence Division.

The Corporation Counsel’s office has taken a page from the Bush administration by advancing the argument that the Federal Court has no authority to limit the NYPD's surveillance activities. In it's brief the City argued that although Judge Haight was apparently within his rights to modify the decree (after all they requested the modification), he was wrong in asserting that the new rules could be enforced by the Court. The logical inconsistency makes my head spin. They further averred that “the N.Y.P.D. never had any intention of agreeing to the incorporation of detailed operational guidelines into the consent decree subjecting itself to contempt for a plethora of potential violations.” The hubris! The City can't have it both ways. Let's review: The NYPD pushed for a loosening of the original consent decree’s restrictions, which was granted. They then came up with their own internal guidelines as required by the Court. These guidelines were incorporated into the consent decree by the Judge. The City consistently violated its own guidelines, and now advances the argument that the Judge has no right to enforce the decree because it never had any intention of following the guidelines it drafted for the purpose of amending the decree! Simply shocking. If Haight has any balls he’ll cite the City for contempt and sock Corporation Counsel with sanctions for advancing such a frivolous argument and wasting the Court's time.
Posted by Mark at 2:55 PM