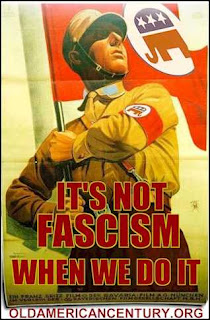 Ever have one of those days when you read the paper and all the stories you read seem to be connected to each other in some way? Today’s Times has a front page article on how Gonzalez’s DOJ is about to issue a “scathing” report criticizing how the FBI has been abusing its power to issue administrative subpoenas. These subpoenas have allowed the feds to obtain thousands of telephone, business and financial records without any prior judicial approval. The DOJ issuing a report criticizing the FBI is sort of like Hitler writing Stalin a letter criticizing his treatment of political prisoners. Nevertheless, the embattled Justice Department has apparently decided to do something to burnish its image which has been seriously tarnished by the attorney general firing scandal. Of course, I would argue that DOJ’s image took a nose-dive shortly after Ashcroft started shilling for the Patriot Act in 2002; after all it was the Patriot Act which granted the FBI the discretion to issue these extra-judicial subpoenas in the first place.

DOJ’s report apparently concludes that the procedures put in place by the FBI to govern the program are being ignored by the agency. Sound familiar? Read yesterday’s post pertaining to the NYPD. The report also alleges that the program lacks effective management, monitoring and reporting procedures. It seems that big brother has trouble behaving itself when granted unfettered and unsupervised power to violate the rights of the people. This is true at the local level (see, NYPD) as well as the national level. So what are these National Security Letters? Unlike search warrants, they are issued without prior judicial approval and require only the approval of the agent in charge of a local F.B.I. office. From the Times:

“The use of national security letters since the September 2001 attacks has been a hotly debated domestic intelligence issue. They were once used only in espionage and terrorism cases, and then only against people suspected as agents of a foreign power.

With the passage of the Patriot Act, their use was greatly expanded and was allowed against Americans who were subjects of any investigation. The law also allowed other agencies like the Homeland Security Department to issue the letters.”

I fail to see how the Fourth Amendment even exists at the Federal level where the FBI has been granted the authority to conduct extensive searches of records merely by asserting that an individual is subject to an investigation. The Democrat’s need to make repealing this sort of nonsense the centerpiece of the Democrat’s need to make their legislative agenda. The Patriot is encouraged by the fact that the Democrats appear to be finding the ground beneath their feet and exercising the position of their majority to push for hearings on a variety of issues, but it isn’t enough. The liberal caucus in the party must become more aggressive and continue its efforts to pry the lid off the DOJ, no matter what nastiness comes crawling out.

Another story in the Times reported that violent crime rose by double-digit percentages in cities across the country over the last two years. The Times failed to note that the increase occurred despite the overwhelming increase in law enforcement power (see above, and below)and a huge influx of money. According to the Times, “Local police departments blame several factors: the spread of methamphetamine use in some Midwestern and Western cities, gangs, high poverty and a record number of people being released from prison. But the biggest theme, they say, is easy access to guns and a willingness, even an eagerness, to settle disputes with them, particularly among young people.” Bullshit. The real culprit here is the government’s approval of violence as a means to solve social problems. From the “pacification” of Baghdad to the extra-judicial torture of unindicted suspects, to the unfettered power granted the police, the message has gone out across the land that the government approves of violence. Until we stop our insane slide into brutality and totalitarianism, the crime rate will continue to rise. One can only hope that the people will at some point realize that there is a better target for their ire than their neighbors.
Posted by Mark at 9:23 AM

"One can only hope that the people will at some point realize that there is a better target for their ire than their neighbors."

Sir, would you kindly come down to our office and explain the implications of you last statement.

The FBI is apparently relying on one of Bush's signing statements in order to violate the law.

Indded you are right. From Charlie Savage's Globe article, excerpted in Greenwald's blog:

"When President Bush signed the reauthorization of the USA Patriot Act this month, he included an addendum saying that he did not feel obliged to obey requirements that he inform Congress about how the FBI was using the act's expanded police powers.

The bill contained several oversight provisions intended to make sure the FBI did not abuse the special terrorism-related powers to search homes and secretly seize papers. The provisions require Justice Department officials to keep closer track of how often the FBI uses the new powers and in what type of situations. Under the law, the administration would have to provide the information to Congress by certain dates.

Bush signed the bill with fanfare at a White House ceremony March 9, calling it ''a piece of legislation that's vital to win the war on terror and to protect the American people." But after the reporters and guests had left, the White House quietly issued a ''signing statement," an official document in which a president lays out his interpretation of a new law.

In the statement, Bush said that he did not consider himself bound to tell Congress how the Patriot Act powers were being used and that, despite the law's requirements, he could withhold the information if he decided that disclosure would ''impair foreign relations, national security, the deliberative process of the executive, or the performance of the executive's constitutional duties."

The statement represented the latest in a string of high-profile instances in which Bush has cited his constitutional authority to bypass a law."

A shared web hosting maintenance or understood hosting worship army or receive assemblage refers to a net hosting servicing where diverse websites reside on anyone web server connected to the Internet. Each site "sits" on its own break-up, or section/place on the server, to regard it detach from other sites. This is on average the most thrifty choice notwithstanding hosting, as uncountable people share the overall cost of server maintenance.
[url=http://hostinghouse.pl]hosting[/url]

[url=http://longchampsacsa.edicy.co/]longchamp soldes[/url] For a company that has seamlessly blended its timeless aesthetic and unparalleled quality with all the romantic notions of tradition, however, London Fog is an aptly chosen name. The high level of integrity Mulberry Antony Natural Leather Messenger Bag Black for Men,Cheap Mulberry Bags On Sale, Mulberry Bags Outlet, fast delivery. that has built this brand's unwavering reputation now saturates every article, fabric and stitch of its various offerings. From sweaters to sunglasses to handbags, if it's London Fog, it's likely to last indefinitely.
[url=http://space.canoe.ca/longchampbagsd/blog/]longchamp soldes[/url] There is nothing vague about Bane. No jokes. He a very clean, In Style Mulberry Women's Alexa Leather Satchel Red Bag. We sale all kinds of the newsest style that all are cheap price and high quality. clear villain. Washing Down Bags. Again, a front-loading washer is the best. A mild detergent is best. For what they perceived as the final entry in the Indiana Jones franchise, director Steven Spielberg and producer George Lucas pulled out all the stops. They set their hero some long odds before, but never like this: Indy (Harrison Ford), on horseback and armed only with his pistol and whip, against an indomitable World War I tank. He can do anything that might endanger his father (Sean Connery) held hostage inside, while the crew that ridiculously outguns him is under no such obligations towards him.
[url=http://longchamppliagea.webnode.nl/]sacs longchamps[/url] All you need is to tun on your computer and make sure your computer is connected with the internet. Then you just strike the icon of browser on the screen and click into the name of the handbag you like say hermes handbag. Immediately, there will be at least thousands of handbags at the window. You might recognize some of them from past years, but they are all gifts that I truly Fabulous Mulberry Women's Standard Bayswater Leather Shoulder Black Bag online supply Save 50% and free shipping anywhere recommend. You might want to bookmark or pin this post for future reference - and it's always helpful to send it to someone who is your own personal Santa. Everyone needs a little help now and then! For the photography photo fan: A digital photo frame. One of a kind beauty is how you can be described, so why not have a purse that fits the same description? The Kiera Bags ocean inspired design captures the seas waves and succulent blue colors. Luminous and compelling, its eye-catching pattern of Swarovski crystals adds extra dazzle to any evening look. Let the Kiera Bags current carry you away into the night as you let loose on the town.