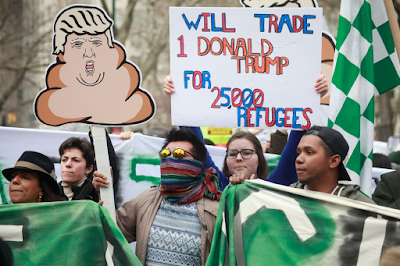 Here we are, the day after. Everyone still breathing? Good. Some of the hysteria has begun to die down, although I must admit it seems like the nation is still one whisker away from freaking right the fuck out. The protests last night warmed this old patriot’s heart. It was like the Boston Tea Party,  but with less civil disobedience and more I-Phones.  Of course, the corporate media focused on the one idiot who thought that burning the American flag on CNN would be a great background for a protest selfie, thereby undermining any respect the nascent anti-Trump street protest movement might have garnered from the public at large.  Circle that firing squad, lefties!


Speaking of CNN,  I was walking through the kitchen at work this morning and was treated to the spectacle of  a slightly manic  Chris Cuomo interviewing a preternaturally calm Rudy Giuliani about the plans for the first 100 days of Pussygrabber’s administration. Someone was making a smoothie so I couldn’t hear what Rudy was saying, but it dawned on me with considerable sadness that this would not be the last time I see America’s Mayor on CNN holding forth about mass deportation and denying climate change, rather he and the rest of the Basket of Deplorables (Gingrich, Christie, Palen),  would be our constant companions on our upcoming  4 year journey to Mount Doom. As depressing a sight as I have ever seen. Little known fact: I was with Rudy Giuliani on 9/11. By “with him” I mean he was cowering in the basement of 100 Church Street as the second plane hit the Trade Center, as I was walking out the front door. We parted ways soon after. I walked back to Brooklyn after the second tower hit the ground, and he walked into the history books, lauded for something I don’t think he quite deserved. But I digress.


For years I have tried not to get bogged down in the unseemly battle between the alt-right Republicans and the corporate Democrats. While it wasn’t that hard to pick a side, it was pretty tough to lustily cheer for my team. Without beating the dead horse too soundly, I really thought that the Democrats had turned the corner when Bernie started picking up states in the primaries. I was shocked at his success, and dare I say it, optimistic? Of course, like all things too good to be true, it didn’t last. Bernie was run out of town by Sheriff Wasserman-Schultz, and later trotted around by the Clinton campaign, siphoning off the anger that should have been directed at the DNC for casting him aside. I don’t blame Bernie. If Clinton had won he stood to gain a position where he could have exercised immense influence, well, as long as he didn’t push for anything TOO crazy. With a Trump victory, Bernie goes back to the Senate and back to a role at which he excels, being a pain in the ass. Here’s hoping he gives Paul Ryan and Trump a case of hemorrhoids so bad they can’t sit down until 2020.
Posted by Mark at 1:53 PM No comments: Links to this post

It's Mourning in America

The Patriot is not surprised. Racism, America’s original sin, staged a coup this election, aided and abetted by the upper middle-class, who decided that aligning themselves with the KKK was preferable to the unseemliness of confronting their own complicity in the subjugation of women and minorities.  In all fairness, it should be noted that 53% of well-educated white women also cast their votes for President Pussygrabber, thereby demonstrating that privilege and class trump, (ahem),   gender and feminism as motivation for selecting a president.


Of course, there is plenty of blame to go around. The Patriot reserves special ire for the DNC and the feckless moderate democrats, who talk a good game when it comes to matters of freedom in the bedroom, but reveal themselves to be fairly conservative when provided with an actually progressive candidate like Bernie Sanders.  Whether Bernie would have won against Trump is an open question. I believe he would have, others think not, but I sure would have preferred to go down swinging rather than have the hopes of my children dashed on the rocks of a bland, mediocre candidate like Hillary Clinton.


The magnitude of this loss is still seeping in. This morning I contemplated an FBI under the control of a paranoid, demented Rudy Giuliani, and a Department of Justice under the control of Chris Christie. To say nothing of the fate of a Supreme Court to which Trump may have up to four appointments.  What else? He has already named prominent climate change denier Myron Ebell of the Competitive Enterprise Institute to lead his transition work at the EPA and fossil fuel lobbyist Mike McKenna for the Department of Energy. Worse to come, I’m sure.


While backlash racism accounted for a large  part of that heretofore hidden Trump vote, (really a latent anti-Obama vote), additional blame can be laid at the feet of the Democratic Party, who long ago abandoned the interests of the white working class (hell, the entire working class), to focus on  cultivating their relationships with Goldman Sachs and Wall Street. As Thomas Frank wrote in an excellent article in the Guardian  this morning, “Maybe it’s time to consider whether there’s something about shrill self-righteousness, shouted from a position of high social status, that turns people away.” Yes, do look into that, Democratic leaders.


Bernie knew. He so clearly defined the problem and offered a real solution that the party elites couldn’t possibly accept. Turn away from elitism and embrace the working class. They couldn’t swallow it and that’s why they destroyed him. Red-baited him from the left. Clinton couldn’t even bring herself to support a $15 an hour minimum wage for Christ’s sake. There was more anti-Bernie rhetoric coming from moderate Democrats than there was from Republicans. I spoke to more than one Trump voter who said if Bernie was running they would have voted for him. He understood them. He cared about them. She cared about getting elected. The general election was over the minute she became the nominee.


I don’t know what’s in store for us over the next four years. My hope is that the turgid nature of our political system will wear Trump down like it does to everyone else who takes office with grand ideas, only to be confronted with the reality that governing is really, really hard. Running a country is not like running a corporation. You need to be able to forge consensus to get anything done.  Maybe he decides after one term that his talents are better used elsewhere. We can only hope.
Posted by Mark at 3:07 PM No comments: Links to this post