The Patriot is cruising at 35,000 feet on his fifth trip to California in as many weeks. This incessant jetting around the country has put a serious crimp in my blogging schedule and many events of note have passed by without a mention here. I’m not one for making up lost time and rehashing old events. Apparently the Democrats are still unable to mount anything approaching an opposition to the fascist juggernaut. One only need look at their apparent lack of concern over Judge Mukase’s statement at his confirmation hearings that he thinks the president should be able to ignore federal statutes with which he disagrees to be reassured that things are business as usual in Washington.

Constant travel, while interesting on some levels, is nevertheless quite stressful. My Continental flight was an hour late taking off from Newark this morning and it is a near certainty that I’ll miss my connecting flight to San Luis Obispo. The gnawing feeling in the pit of my stomach will no doubt remain until my sprint through LAX in what is sure to be a vain attempt to get to my hotel in time to catch up on the three weeks of work that have been piling up on my desk. At least the sushi is reasonable on the central California coast. I can only hope that I get out of the state before the wildfires reach north from Santa Barbara and cut off my escape route.

In brighter news the Patriot was recently informed that access to this blog has been cut off at various military installations due to its subversive content. I guess all those impressionable young officers of character can’t be exposed to too much thinking outside the box lest they hesitate before dropping their payloads on Iraqi villages while the mighty eagle spreads democracy around the Middle East. I’m not prone to paranoia, but I have also been informed by anonymous sources with ties to the intelligence community that the government is quite vigilant at monitoring blogs that they consider subversive. I’m not really surprised. I’m also not particularly concerned. This is the same government that set up the TSA to function as the vanguard against terrorism in American skies. Wait, maybe I should be concerned.

Everyone who has ever taken a civics class as part of their education knows that the true test of freedoms is how they are treated in a time of crisis. What civics class never taught is how a manufactured crisis like the “War on Terror” can be used to strip away constitutionally guaranteed freedoms in the name of consolidating power in the executive branch. The intelligence services have decades of experience manipulating public opinion and they have lately had the willing support of a complicit mainstream media. We are witnessing such a manipulation of public opinion in the current demonization of Iran. The stage is once again set for military action based on false evidence and flimsy justification. There is no will to stop it, and no way to keep it from happening, especially when since the silent coup d’etat has already happened.
Posted by Mark at 7:29 PM 5 comments: Links to this post

It's Tea Right Here In Berkeley

Ok kids, the Patriot is in Berkeley California, land of the unrepentant deadhead. I will admit that noodling around UC Berkeley has made me a bit nostalgic for my own college days. I have had a few interesting experiences since I’ve been in town, although nothing that quite compares to being stabbed in the gut while buying drugs during the heyday of the crack epidemic. Perhaps an unfair comparison some 20 years on. Mostly I have been wandering the streets looking for whatever it is that makes Berkeley celebrated among intellectuals and stoners alike. Can’t say that I found too much to distinguish this town from college towns back east. Ultimately, Berkeley is much like every other college town, albeit with a liberal California overlay; vegetable powered cars, the smell of calitas rising up through the air, that sort of thing. The students here look like students everywhere, except here they are more prone to driving their parent’s aging Volvos rather than the IRocs sported by my better groomed friends from Jersey. This is also a very diverse community; equal opportunity panhandlers from post dead tour refugees to people in actual need of food. Those of you who know me know that I am a very pro-California person of late but, dare I say it, I prefer the honest fakeness of the south to this contrived hippie nonsense of the north. This confuses the Patriot. Perhaps I need to spend some more time parsing what is real and what is artifice here on the left coast. I welcome comments from readers who actually live here.
Posted by Mark at 11:35 PM 5 comments: Links to this post 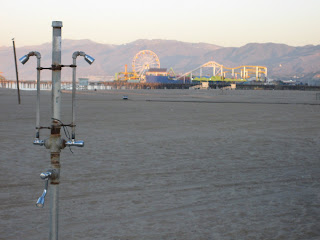 I was here for less than 24 hours and spent most of my time running up and down the bike path; 13 miles in all. You see so much more of a place while running or biking. These were taken during this morning's run. I'm at LAX waiting for a plane to San Francisco. No rest for the wicked.
Posted by Mark at 5:49 PM 8 comments: Links to this post 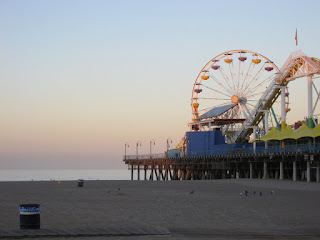 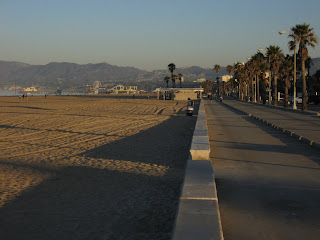 Posted by Mark at 5:40 PM No comments: Links to this post 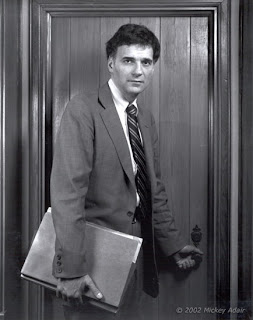 (This posting is dedicated to my friend Lee who gives me shit about Nader and the 2000 election whenever we go out drinking).

Greeting fellow freaks! The Patriot is traveling for work once again and finds himself in at the . Quite a nice hotel actually. On the plane ride out here I had occasion to watch the documentary about Ralph Nader that came out earlier this year, An Unreasonable Man, and I recommend it highly, especially to those who think that Nader cost “us” the 2000 election. Bashing Ralph Nader has become popular sport among the institutional democrats who can’t seem to get it through their heads that their arguments about why Gore lost (won) in 2000 have nothing to do with Nader and everything to do with their centrist strategy. Dare I say that the Democrats failing to put up a fight against the Republican agenda over the last six years proves Ralph’s point that the difference between the parties is minimal at best? Nah. For those of you who drank the Carvell cool-aid nothing I can say would change your minds. Nevertheless, I ask you to consider the following: Nader did not work for the Florida Secretary of State, the Palm Beach County Election Commission, the Al Gore campaign committee, or the United States Supreme Court. Yet, he has become a scapegoat among Democrats for Al Gore’s loss. These diehard Democrats are averse to looking at the failings of their candidate. If Gore had won , he would have had the necessary Electoral College votes to have won the election and the results would have been irrelevant. There’s no moral ground for claiming that Nader took any votes away from the stumbling, pandering Gore, who, like Kerry four years later, campaigned as though the only votes he had to “earn” were Republican votes. Gore in fact WON not only the national vote but the state of as well, despite the bogus ex-felon purges, the hanging chads, the “Jews for Buchanan” and the Nader vote. According to a recount commissioned by a consortium of major newspapers, who of course buried the story, Gore would have won , and thus the battle for electoral votes, if he had commissioned a statewide recount. Despite everything, he got the most votes. He just didn’t have a the balls to go to the mat against Bush. If he really thought so much was at stake for the Country, why didn’t he make use of every opportunity available to him to keep Bush out of office?

The fact of the matter is that Nader’s support overall brought voters to the polls who never would have gone there in the first place. Also, EVERY third-party on the ballot in garnered enough votes to throw the election to Bush, but the Democrats, in typical fashion, decided that the left wing of the party was responsible and should be roundly punished. This is quite convenient because it draws attention away from that annoyingly loud sucking sound, recently identified as the DNC drawing on the tit of corporate money.

And then there’s this (excerpt):

Had Nader not run, Bush would have won by more in . CNN's exit poll showed Bush at 49 percent and Gore at 47 percent, with 2 percent not voting in a hypothetical Nader-less race.

Gore lost his home state of , Bill Clinton's and traditionally Democratic West Virginia; with any one of these, Gore would have won.

Nine million Democrats voted for Bush, and less than half of the 3 million Nader voters were Democrats.

Ninety thousand African Americans were illegally and intentionally stricken from the voter rolls in under the guise of felon disenfranchisement.

The 5 to 4 Supreme Court decision stopped the vote counting that favored a Gore victory.”(editorial comment: Gore had other avenues to challenge the decision which he declined to take advantage of)

And let’s not forget 2004. Kerry cravenly conceded to Bush while the enormous irregularities in the Ohio vote were being contested by the Greens and Libertarians, and said not a word about the disenfranchisement of untold numbers of would-be (mostly Democratic) voters nationwide that probably cost him the election. Yet he managed to wage a vicious, resource-wasting campaign of harassment to keep Nader, and his message, off the ballot in as many states as possible. It’s the only fight Kerry won.

This will become relevant when the chicken littles go running to vote for Hillary Clinton in 2008, the most conservative Democrat in the history of the party. VOTE GREEN in 2008. What have the Democrats done for you lately?