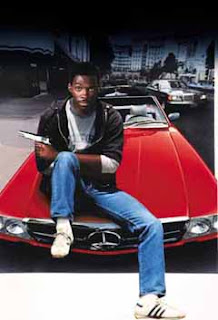 Hey kids. the Patriot was taken to task last night by one of his five readers about the relative dearth of new posts lately. Also noted was the presence of the occasional spelling error. Were I professional blogger I would perhaps be chagrined and chastened, but since I am a mere hack and gadfly, I offer apologies and move on. This very posting will no doubt be frought with mistakes, since I am typing this entry on a portable keyboard in a hotel in Los Angeles which has the annoying tendancy to suddenly and without warning start writing everything in Kanji characters. As you can imagine, this is really 案老いんgあs用完野ど.

I have been in LA since yesterday for work. Not just LA, mind you, but swanky Beverly Hills. People who think New York City is the poster child for American excess and consumerism should tool around in a big white SUV on Rodeo Drive like I did this morning. Wallowing in wealth and privilege can be seductive and ultimately intoxicating. I just ran a fwe miles on a treadmill at the Equinox Beverly Hills and was greeted at the completion of my work-out by a man bearing a chilled towel who also gave me a glass of iced lemon water and directed me to the whirlpool. The strangest thing? It wasn't at all uncomfortable once I started thinking that I deserved such treatment. And there's the problem. Everyone deserves such treatment, but everyone isn't going to get it. The maids who cleaned up my hotel this morning aren't going to get it. The stratification of the classes is so much more obvious here than in New York; brown people clean things and white people drive around in silly cars talking on fancy cell phones. There are many nice things about California; Jamba Juice, the climate, the ocean, but the division of wealth here is so stark that it makes me uncomfortable. There are a lot of homeless people here, many more than the last time I was here two years ago. I hate to sound like a big buzz-kill but I think this country is heading for a reckoning and it might be coming sooner rather than later. I could go on and on, but I'm late for my nori-cucumber facial. Peace.
Posted by Mark at 6:20 PM