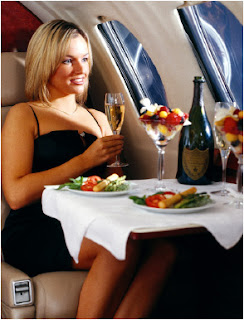 The following entry was written somewhere over the continental United States yesterday:

My 7:45am flight from LAX to Newark was canceled just before boarding due to “mechanical errors.”.As a fairly seasoned traveler, the minute I heard the gate agent make the announcement I hustled to get on line to be rebooked. (One especially annoying feature of the airline industry is the fact that it rewards the most pushy passengers in the face of adversity; by the time the little old lady at the back of the line gets to the front of the line to be re-booked every available seat on the remaining flights is usually long gone, meaning a wait in or around the airport of infinite duration.) My fellow travelers were milling around like a herd of frightened animals and, being for the most part New Yorkers, began to complain almost immediately. The four people ahead of me on line all harangued the gate agent which predictably resulted in their being rebooked on the Monday morning red-eye with a three hour layover in Des Moines. As I learned from my own travel meltdown over Thanksgiving, screaming at underpaid airline employees rarely results in a desirable outcome. When I got to the head of the line I smiled and said something like, “as inconvenient as this is for me it must be much harder on you because you’re the face of the airline and no matter how awful they treat you, you still have to run interference for them in the face of this angry mob.” The result of my small act of kindness? A rebooking on a flight leaving 45 minutes later from 2 gates away and an upgrade to first class. Granted I had to change planes in Dallas, but when you are flying 1st class, who the hell cares. I was content to fly all day.

Treatment of first class passengers is so far and away superior that it makes flying coach the 21st century equivalent of a trip through Alabama on a Greyhound. Being a good anarchist I had heretofore never enjoyed this particular pleasure of the blessed upper middle-class. I can’t say that I didn’t enjoy it. Since our government has gone out of its way to make moving around the country as onerous as possible in a post 911 world, first class may be the only salvation left to the weary traveler seeking respite from the nasty, brutish and not very short ordeal that air travel has become. While the coach passengers are offered the opportunity to purchase a sandwich of grey meat in a plastic sack for $5, 1st class passengers are plied with top-shelf wine and enjoy entrees like salmon in hoisin marinade with a wild rice timbale, brie and a salad of field greens served on actual china.

I suppose the lesson here is to always be nice to underpaid ticket agents staring down an angry mob. It certainly paid off for me. This whole trip was a real mind warp. Among other things I learned that rich people apparently need a steady supply of hot and cold towels always available should anxiety need to be wiped away. But it was fun. I was living way beyond my usual means, on someone else’s money. Can’t complain about that I suppose. From 33,000 feet over the heartland, this is the Patriot wishing you happy travels wherever your final destination may be.
Posted by Mark at 2:01 PM