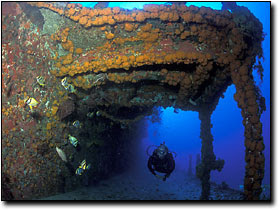 Greeting from sunny . This morning was the most challenging dive of the trip, a quick visit to the coast guard cutter USS Duane. (Representative picture at left). The Duane is a 329-foot cutter that was decommissioned on August 1st, 1985, as the oldest active military vessel. The ship was intentionally sunk in November of 1987 to create an artificial reef. The Duane lies outside of the reef line and can have a ripping current as it did today. Because of its deep depth and strong currents the Duane is generally considered a dive for advanced divers with wreck-diving experience, which I don't really have. Nevertheless I survived with my gear and person intact. There was a scary moment when I was ascending the anchor line and turned my head across the current. My regulator promptly filled with water and I got a belly-full of vintage Gulf Stream. I was able to clear it fairly quickly so no harm done.

Many consider the Duane to be the perfect wreck dive. Before sinking, the ship's hatches were opened and the holds pumped full of water to sink the ship. The Duane sits upright on the sandy bottom at 120 feet. Visibility today was around 50-60 feet-not great, but not too bad either. There are a number of swim-throughs and overhead environments, but I played it pretty safe and stuck to the exterior hull on the starboard side in order to get out of the way of the aforementioned current. For those of you who have never dived a wreck in a bad current the closest approximation I can give is if you imagine what a flag feels like while attached to a flag-pole in a strong wind. That is basically the position a diver takes as he or she descends (and ascends) the anchor line which is affixed to the top of the wreck. Once you descend the line you still have to stay on the leeward side of the ship, lest the current blow you off the wreck and somewhere in the general direction of . I had limited bottom time because I was on air, but the wreck is beautiful and full of barracuda.

I won’t bore you all with descriptions of the shallow reef dives I’ve done in the last few days; suffice it to say that the reef system possesses an abundant variety of marine life. Highlights from this trip include three nurse sharks (one in motion above the reef), an eagle-ray, sting ray, plenty of barracuda, lobster, parrotfish and all varieties of tropicals. All in all a good trip. It will make diving in the quarry feel like swimming in the bathtub.

Sounds amazing - I am definitely going to get scuba certified one of these days...give me a shout when you get back.

ps - did you get my message about the kennedy retreat?