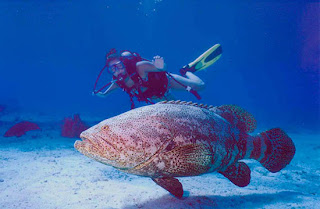 Well after a day of off-gassing nitrogen at my folks place in Dunedin, I’m packing Jack into his suitcase and heading back home up north. I also forgot to mention that I swam next to a 400 lb. Goliath Grouper on one of the reef dives. (Representative picture at left-although that one is probably only about 250-300 lbs.) Moreover, I confirmed my long-held suspicion that I am quite fond of wreck diving and I plan on doing a whole lot more of it over this summer. There’s something about watching the lines of a sunken ship materialize out of the depths as you descend the anchor line that sets my heart singing and blood racing. Diving is a Zen experience in general, but wreck diving requires a total mind/body focus which doesn’t leave any room for ruminating over any of the petty shit that tends to crowd the mind on a day to day basis. Three days of such diving has partly restored my sense of equilibrium which has been absent since Becky passed on in January.

As rewarding as it has been watching Jack grow, daily life the last four months has been hard. Certainly my threshold for other people’s bullshit is pretty low. People complain about so much petty nonsense and think that their troubles are insurmountable. It’s hard for me to find sympathy. Why do people constantly focus on what they lack rather than appreciate what they have? Who knows? Questions like that are beyond me. I guess at the end of the day suffering is personal and relative to one’s experiences. All I know is that diving helps me to put life and death and all of the rest of it into perspective. It has quite literally saved me from going insane on several occasions.

My next trip is a shallow wreck dive of the coast of Long Island on Sunday, July 1, 2007. Offers of babysitting are welcome. If anyone is interested in getting involved with diving and is interested in meeting other divers, I recommend getting in on this dive or visiting my friends at the Ocean Blue Divers meet-up. You can find details about the dive there. In general a fun bunch of folks. There's an Ocean Blue happy hour this Thursday 5/31 on the Lower East Side. Anyone interested in going should shoot me an e-mail. Peace.
Posted by Mark at 9:49 AM