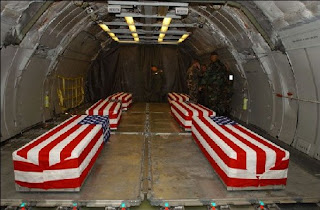 I’m a little concerned that the administration is going to be able to turn Bush’s veto of the Iraq war funding bill into political hay for the Republicans. CNN is reporting the story of the veto as a defeat for the democrats and their “fractured caucus”. Even after everything the mainstream news media has learned about the Republicans willingness to outright lie to push their agenda over the last six years, they still dutifully report the White House talking points as if they were news. It is astounding that the media is focusing on some imaginary disunity among the democrats rather than roundly thrashing the president for his failures in Iraq on the fourth anniversary of the Mission Accomplished photo-op. Well, that’s the news media, I suppose. Corporate to the end and more concerned about access than journalistic integrity.

As for the Democrats, in anticipation of Bush's veto they began crafting a new bill, which strips the troop withdrawal language and adds a series of benchmarks that would measure the progress of the Iraqi government. The bill at this juncture subjects the administration to zero consequences if the benchmarks aren’t met. A senior Republican lawmaker has suggested a possible way to bridge the gap -- calling for troops to be withdrawn if the benchmarks aren't met but allowing the president to waive that requirement if he chooses. If Pelosi, as member of a majority party in the House accepts that kind of nonsense then she should resign. The will of the people was clearly expressed last November. Now would be a good time to ratchet up the pressure on Bush by holding hearings on the lies that were told to Congress to get them to authorize the war in the first place.

We must not forget that people are DYING in Iraq because of this ill conceived neo-con misadventure. There is no exit strategy and there no appreciable chance that the situation will improve any time soon. Its time to cut and run baby, before we run out of space in Arlington.
Posted by Mark at 3:13 PM

I thought people don't die in Iraq, they just become redundant, as in corporate speak for lay offs. Or course, maybe dying isn't the word either. Maybe being murdered is more appropriate. Seems the Patriot feel that a pull out will stop or decrease the murders of innocent people in that country. What say you to those who feel that a pull out would intesify the killing and possibly lead to ethnic cleansing as bad as what was seen in the former Yugoslavia.

No, the Patriot feels that a pull out would free up some several billion dollars for something like universal healthcare. I'd recommend either installing a dictator like Sadaam or splitting Iraq into three autonomous regions. Why we're so interested in preserving Iraq's colonial borders is a mystery to me. In a sense we own Iraq, but we aren't doing anything with it.