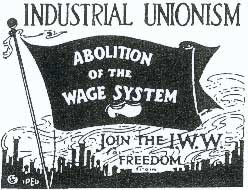 May 1st, International Workers' Day, commemorates the historic struggle of working people throughout the world, and is recognized in every country except the United States, Canada, and South Africa. This despite the fact that the holiday began in the 1880s in the United States, with the fight for an eight-hour work day and also as a commemoration of the Haymarket Riots in Chicago. After the bombing in Chicago, which many believe was instigated by the police in order to disrupt the burgeoning labor movement, police ransacked the homes and offices of suspected radicals, and hundreds were arrested without charge. Anarchists in particular were harassed, and eight of Chicago's most active were charged with conspiracy to. A kangaroo court found all eight guilty, despite a lack of evidence connecting any of them to the bomb, and they were sentenced to death. Albert Parsons, August Spies, Adolf Fischer, and George Engel were hanged on November 11, 1887. Louis Lingg committed suicide in prison, The remaining three were finally pardoned in 1893. How little the government’s tactics have changed in the last century. Today, try to remember all those brave souls who died at the hands of the government to try and bring us a better life, especially the anarchists and members of the IWW. Perhaps some direct action at your job site today would be an appropriate way to commerate the holiday. Not that I'm advocating anything illegal, of course. Be creative.
Posted by Mark at 9:13 AM

one needs to be more and more creative,but never beyond the existing. be creative but legal.or asif if one becomes creative,she could overcome the law.we worship that martyrs because we don't have the courage they had