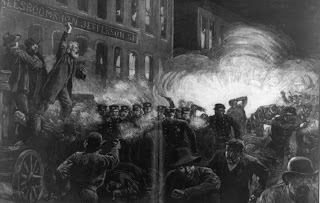 You can't run a consumer-based economy without consumers. From a letter-writer to today's Times in response to the unemployment report:

"Ever since Reagan and his band of "voodoo priests" began breaking the backs of American workers, we've seen a steady decline in the incomes of the majority of Americans. This was aided and abetted by Bill Clinton (NAFTA, etc.) and a compliant Congress, both Dem and Republican-led. This decline was masked by the relative availability of credit, enabling average Americans to stave off the wolf at the door as long as they could refinance or get another credit card. But simply loosening credit won't end this crisis. Most people are way over-extended and giving them more credit is like crack to an addict. The ONLY solution to this crisis that has been building for almost four decades is the creation of good paying, dependable jobs. To paraphrase Mr. Clinton: "It's the JOBS stupid!".

Indeed. The solutions being floated down in Washington all have as their common denominator loosening up the credit markets and encouraging Americans to go deeper into hock. Who in their right mind is going to buy a house, car or even a big TV if they think they aren't going to have a job next year? And speaking of Washington, what's going on down there? Congress had no problem committing a few trillion dollars, without condition, to prop up the balance sheets of large banks who now sit on this money. Nevertheless, when three very large, possibly indispensable manufacturers representing thousands of high paying American jobs approach them for what is a drop in the bucket compared to that assistance we get to watch ridiculous show trials. The bankers already got their money. The workers are fucked. The feds already claim to have no idea where billions of the initial bailout have gone. Fun stuff. A naked grab for money without pretense of accountability.

I do not believe that even the saintly Barack Obama will be able to stem the tide of destruction wrought by the Wall Street titans, should he have the time between walking on water and curing the sick, but he may be our best hope under the current system.

Speaking of the current system, it's all been quite funny to read the comments section of the Times where irate readers are blaming Republicans or Democrats for this economic mess. The true blame, my friends, belongs at the feet of capitalism. This is how the system works. Marx knew it and you all know it too, even though you're too indoctrinated by phony propaganda to actually say it. The post WWII economic boom is a blip in our history. For most of the last 238 years the workers and middle class have scrabbled in the dirt just to survive while the rich hoard all the money. We're just getting back to our robber-baron roots.

The power elite sold us on the idea that the elimination of civil rights and a bigger domestic police force are necessary to keep us safe from radical terrorists and everyone bought it. Forgive me if I think there was a larger agenda at work. What do you think the government is going to do with all those expanded powers and robo-cops when it starts to get ugly in the streets? Dark days ahead.
Posted by Mark at 1:42 PM

Dark days indeed, Patriot. The party's coming to the end and the louts are grabbing the leftovers again. On this with you I agree. We are staring down one of the deepest holes we've ever dug in our 238 years of the great experiment. I'm talkin' dust bowl days, but this time it won't be the fields of Oklahoma gone fallow, rather our industry gone to seed. Dark days, indeed.

Irony? I'm just a crank with a blog. Who has time to think about irony? I would point out that there is a big disconnect between what the elite says is "good for the country" and what it does. The fact that anyone believes in institutions anymore is remarkable, in my opinion. After being lied to for so long, why do people continue to believe?