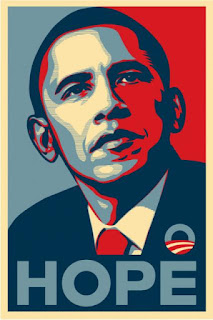 Remarkable. People dancing in the streets, Times Square filled with cheering people, the Empire State building lit up a bright blue while people weep in the streets at the sheer joy of seeing Barack Obama elected the first African-American president of the United States. I will be the first to admit that after the last eight years I never thought I would see a day where Americans could be brought together so cohesively around one thing. After all, the Bush administration at its rotten, stinking core was all about fear. Fear of the terrorists, fear of your neighbor, fear of anyone or anything that was somehow different. This fear showed up in the McCain campaign with its divisive talk about the “real America” and McCain’s reference to Obama as “that one.” In the dark days after 9/11 the Republican Party learned to manipulate people’s fear and turn it in to an ugly, divisive force that could be brought to bear against anyone it considered a threat to it’s plans for a perpetual right-wing oligarchy. The strategy was so successful in 2000 and 2004 that I fully expected it to work again in 2008. I was wrong. Last night Americans proved that they have the ability to rise above the cesspool of hate and venom and coalesce around something far greater than a set of political beliefs. Last night Americans showed the world that our “great experiment” with Democracy still has some life left in it; that it couldn’t be killed by the fear mongers and haters presently occupying 1600 Pennsylvania Avenue. The most noteworthy, and uplifting thing about Obama's success is that he assumed that Americans are capable of going beyond self-interest. To borrow from Gary Kamiya on Salon today ,"[t]he America envisioned by Obama is one in which the privileged care about the plight of the less fortunate because that care, that solidarity, is an inseparable part of who we are as Americans." When was the last time you heard THAT from a politician?

The import of this election cannot be overstated. Sure, Obama may end up being a centrist and frankly, I don’t see how he could possibly live up to the lofty expectations everyone has of him, but how he governs is much less important than what he represents. 40 years ago, when I was born, African-Americans were still relegated to separate bathrooms and water fountains. Lyndon Johnson had to expend almost all of his political capital ramming a civil rights bill through a reluctant Congress. Today, a scant ½ lifetime later, a black man is the president-elect of the United States. Watching Jesse Jackson weep last night on television I realized, quite viscerally, that we have come a long way. My son, who is now almost two years old, will grow up in a country without ever thinking it strange that the president of the United States is an African American. All of his friends, and all of the children who will learn about the Presidents in school for the next 50 years will see Barack Obama’s face and not think it strange that he resided in the White House. That, my friends is the real impact of this election. As Tom Friedman put it in the Times today, the Civil War is finally over.
Posted by Mark at 3:04 PM

I agree. He probably won't be much more than a centrist. But what a symbolic victory - and a real victory for our kids to grow up in a multi-racial world. We know now Obama will listen to all voices (as long as Rahm Emmanual makes sure they're centrist democrat voices)

The Democrats, on a national level, are less centrist than they were when Carville and Clinton controlled the party. Howard Dean's ascendancy was fought tooth and nail by the old guard. I'm hoping this triumph of the so-called liberal wing of the party means the Democrats as a whole will return to the pre-Carter party of the '60s. I'm not overly optimistic though.

The statement that the Civil War is over just aint true. Just look how many of the former confederate states voted. Louisiana voted about 60% for McCain. Look who gets imprisoned and executed; who still is denied meaningful enfranchisement or doesn't enjoy full citizenship, i.e. the right to sit on juries and judge members of their community. And this is not just a southern problem. Look how segregated cities like New York are. I mean, how many black people did you watch the election results with? Cicero said Freedom is participation in power. Black people are still denied full participation in power, even if a black man is president. No doubt, we have come a long way as a nation and it is without question that African Americans enjoy so much more than they use to. But sh*t is not alright and racism is not over. It is still happening ingrained in the structure of this country. So let's not assume that the battle to ensure that all people are treated equally has been won. In essence, whitey needs to stop patting himself on the back for casting a vote for a qualified black candidate. That being said, last night was an amazing experience. Bizarrely, living in a the south, especially in a city like New Orleans, black and white people hang out at the same places and are far more likely to be friends and neighbors. Due to that, I was able to share the experience of witnessing the first black president being elected with both the ancestors of slaves and masters, hugging one another and rejoicing over the prospect of a better future.

Although I cannot escape being skeptical about what change is actually going to happen (if any), I have to whole-heartedly agree with your last paragraph. It's truly a positive sign at for how people's minds are working. Let's hope it's just another big show.

And that, Crackerass, was the most remarkable thing this country has seen in years. I am in no way implying that there is no more racism left in this country, but I think the election of a black man to the office cannot help but have an effect on the way children see race and the way African-American children view the outer limits of their potential. Barack may be an establishment candidate but he did not grow up with silver spoon in his mouth, like some other recent president. He wasn't a child of the inner city, but neither was he born to privilege. Part of me wonders whether such a strong reinforcement of the Horatio Alger myth as presented in the person of Barack Obama is a good thing, especially when opportunities for poor black folks are still so limited, but the countyry has been running on such a short supply of hope lately that I think his story will add to the American fabric rather than detract from it. At least until he screws something up in his first 100 days.

The Civil Rights Act of 1964 ended the type of segregation you are writing about, that was about 4 years before you were born! I don't want to nit-pick, but it is indicative of the excess of euphoria that has greeted the Obama win.
Sure, it's a nice thing, but day after the win, there were the same (disproportionate) number of African Americans in prison, unemployed, under-educated and generally subjected to all sorts of economic and social ills. Did you see the article in the New York Times of November 7 about the tiny numbers of African-American kids who are enrolled in New York's 'special' high schools, traditionally a pathway for kids with high intelligence and modest economic resources to reach the elite? Just another example of what I am talking about.

The Civil Rights Act of 1964 didn't end all segregation. I was born in 1968 in Maryland and was baptized in a segregated church