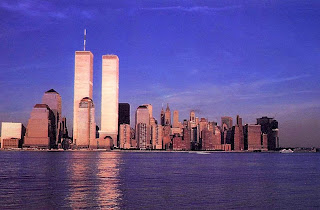 Although it has been seven years since the 911 attacks, their impact continues to shape the way the country reacts to perceived threats and has pretty much lead to a complete gutting of the Constitution in the name of national security. The attacks have been used as cover by the Republican Party to start a war and engage in intrusive warrantless spying on the American people. I have a deeper connection to the attacks than most because I was there. I worked a block away from the Trade Center and stuck around long enough to get immersed in the mayhem and have to run for my life up Church Street when the towers collapsed. I’ve posted my story before, in 2006, but I felt like putting it up again as a memorial to everything we lost that day.

“On the morning of September 11, 2001 I and a number of other newly hired attorneys were due to have our picture taken with then Mayor Rudy Giuliani on the steps of City Hall. We were all supposed to meet on the second floor of the Law Department and then proceed to City Hall as a group. I was running late that morning and didn’t get to 100 Church Street until shortly after 8:30am. The first plane must have struck the tower when I was in the elevator because I don’t recall hearing any explosion. When I arrived on the second floor, I was somewhat surprised that no one else was there yet. Apparently the folks who were on the floor at the time the first plane hit had immediately gone downstairs to see what was happening. I grabbed a co-worker and went back to the lobby of my building. As I was pushing through the front door of the building the second plane hit the tower. There was a tremendous explosion and flash of light reflected in the windows of the building across the street which promptly shattered due to the explosion. A piece of the plane’s engine (I could see the flywheel clearly) tore through a section of roof of the next building north of 100 Church and landed with a tremendous thud about 20 yards from where I was standing. It was still there, smoking, when I ran up Church Street later on that morning.

Immediately after the second plane hit I bolted back into the lobby which was already full of FBI agents who were screaming at everyone to evacuate the building because it was about to collapse. I remember thinking at the time that this fact was kind of curious since only about 20 minutes had passed since the first plane struck the tower. To my knowledge the only tenants of 100 Church Street at the time were the Bank of New York, the City Law Department and a private law firm. At this point I still didn’t know what had happened; my first thought was that someone had blown up the Federal building next door. It was only when I exited the lobby into the street that I saw the towers burning for the first time.

Instead of leaving the area immediately as many of my colleagues did, I bummed a cigarette from a co-worker and stood in front of my building watching the tragedy unfold. I saw many, many people jumping to their deaths from the holes where the planes went into the tower. Fortunately, the Federal building blocked any view of them landing. The streets were full of paper blowing from the Trade Center offices like it was a perverse ticker-tape parade.

There were a lot of people on Church Street and the rumor mill was grinding out information every second; there was a third plane, the Met Life Building had also been hit, etc. At some point before the first Tower collapsed a fighter jet appeared in the sky which started a panic because people thought it was another hijacked plane. When the first Tower collapsed I was standing on the corner of Church Street and Chambers Street. I remember very clearly thinking and telling a number of friends and family that additional explosives must have been placed in the Tower because I saw puffs of smoke emanating from several stories below the fire just prior to the building collapse. I also thought I heard an explosion but I can’t be sure if this is a real memory or not. I watched the implosion and then ran for my life up Church Street with thousands of my fellow New Yorkers.

I was much further away when the second tower collapsed; on Canal Street and I could only see the top of the building as it disappeared.

We were shut out of the building for eight months as it was inside the frozen zone. We returned in April of 2002. Meanwhile life changed for me and for everyone else in the world. Anyway that’s the outline of my story. Hopefully many of you were a lot further away and only had to watch it on TV because, frankly I have had a difficult time processing all of that destruction. The fact that our government has seen fit to expend all of the world’s positive feelings toward the United States by waging war on the entire world saddens me beyond all description. Peace.”
Posted by Mark at 7:34 AM