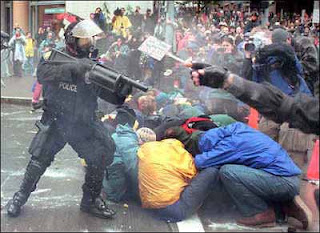 I haven’t posted in a while. Mostly this is because I have not had any time, but it’s also partly because I have come to realize that living life is more interesting than writing about it. So what’s new? Things have been slow at work and I’ve taken a step back from distance running. I’m back to 5 miles per day for 6 days per week. I found that when I was running 10 on Sunday and continuing my weekly mileage I was pretty sore and I was also shoving a fair amount of high calorie food into my face because I was constantly hungry. As a result, despite getting my mileage up around 40 a week, I was incrementally gaining weight. This was not the result I hoped for so I’m circling in a running holding pattern until I can figure out when to up the mileage to better prepare for the Long Island ½ Marathon in May. The runner’s term for what I’m doing is accumulating “junk miles,” but I never liked the term. Holding pattern is more descriptive.

So, what has the government been up to lately? Let’s see, the Democratic controlled Congress is circulating a draft of its FISA bill which essentially gives Bush everything he asked for. The current draft does not contain telecom immunity (solely for temporary strategic reasons), but incorporates every substantive warrantless surveillance provision of the Rockefeller/Cheney bill passed by the Senate. The bill was drafted by Pelosi and Reyes, may they rot in hell, and is expected to be signed by the President without any complaints. Your opposition party at work in the Brave New World folks.

What else? Well, the Washington Post is reporting that the DOJ has created a domestic intelligence system set up through computer networks which will gather together broad new categories of behavior of Americans, from the suspicious to the innocuous. Federal authorities hope that The National Data Exchange, or N-DEx. DEx will become a "one-stop shop" enabling federal law enforcement, counterterrorism and intelligence analysts to automatically examine enormous caches of local and state records for the first time. But wait, doesn’t this violate our constitutional privacy rights? The answer is it depends on what your definition of “privacy” is:

"As Congress debates new rules for government eavesdropping, a top intelligence official says it is time that people in the United States changed their definition of privacy.
Privacy no longer can mean anonymity, says Donald Kerr, the principal deputy director of national intelligence. Instead, it should mean that government and businesses properly safeguard people's private communications and financial information. . . . "

You can trust us, we’re from the government! Remind me again why I should care who wins this election.
Posted by Mark at 3:50 PM

The shit that congress caved into will more likely manifest itself in ways that won't be as obvious as what the picture that heads your post depicts. It will be the "soft" intrusions of wire taps and warrantless searches of electronic communications. The cave in by congress also sets the stage for retroactive immunity for those who have already engaged and facilitated such illegal actions in the past.

BTW - I think that the "Battle in Seattle" and the activity at DNC convention did more harm to the progressive movement than good. They were easily characterized by opponents to make progressives look rather silly and ineffective. Because they were of course; and the PR from those activities cemented that notion in the mainstream-conventional mind.

Unfortunately, with Congress so thoroughly coopted by business interests, I fail to see any reasonable alternatives other than fighting in the streets. Any successful progressive movement in the United States in the last 50 years was precipitated by resistance. Civil rights, viet nam. Some heads are going to need to get smashed before the government realizes that they cannot completely gut the Constitution and hand the remnants over to the Jesus freaks. While wire tapping and warrantless searches are thje beginning, they by no mean exclude the possibility of more violent action by the state. After all, the net result of warrantless wiretapping is someone kicking in your door at 3 in the morning and carting you off to a federal detention center where, thatnks to the Patriot act, you can be questioned without a lawyer and beaten to extract information. What is happeining in the United States today is a textbook example of a complacent citizenry willingly voting for fascism. Thanks to the corporate media's incessant fear mongering and heretofore easily available access to credit, the average American fears the government less than the brown people in the middle east and mexico. I submit that once Americans reaize how badly they have been mistreated by their own government, heads will roll. Eventually.

Sorry about the typos. Jack is trying to crawl up my leg.