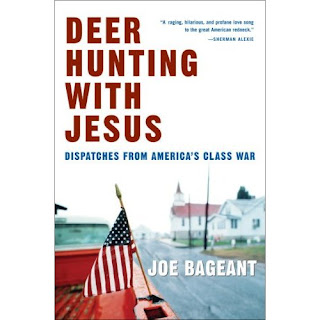 I’ve been enjoying the hell out of Joe Bageant’s book Deer Hunting With Jesus (Dispatches from America’s Class War) , which purports to explain why the Democrats have lost the redneck vote in the south and why said rednecks continue to vote Republican despite the fact that doing so is clearly not in their economic interests. In that respect the book is a little like What’s The Matter With Kansas, although that book takes a more academic approach to analyzing the issue. Bageant returned at age 59 to the small Virgina town where he grew up, Winchester, and his book is a collection of his observations on how badly the working-class is being exploited by the petty Republican bourgeois that runs that town and others like it all across the South. He also comments on the strategy of the Republican Party operatives who have made a science of infiltrating and manipulating local governments and spreading propaganda and rumor about the so called liberal elite. I’m not sure why I never encountered Bageant before; his writing is akin to Hunter Thompson’s best political analysis and he has apparently been at this for years. Here’s a sample from an essay posted on his web site (link is on my links list) which takes the media to task in a way the Patriot greatly admires:

“We have all assembled our identities from the prepackaged and highly processed consumer media spectacle that now constitutes the American experience, mixed and matched personality ensembles from synthetic experiences and products, all of it purchased at the same globally franchised company store, all of it within the context of our own particular tribe of consumer cultism and commodity fetishes. It's vapid, it's absurd. But it's all we've had to work with from the birth, consumer culture derivatives of consumer culture derivatives. It's a long way back to the Greek classics or even de Toqueville from the Da Vinci Code and Oprah. And an even longer way back to pre air conditioned life and black and white TV, if you know what I mean. Our estrangement from such things as an entire afternoon of quiet reflection or even the most common discomforts or simpler amusements has not been chronological. Thanks to technology, it has been quantum and exponential, developing in all directions simultaneously. Bondage though it is, nobody wants out. Not really. It's like sex. It feels good as along as you don't do too much thinking about it. In fact, few of us can conceive of an "outside." And the miniscule number of people who can imagine there being something beyond "society of the spectacle" find it a fearsome thing. They worry about possibly living without HBO while half the world wipes their asses with their fingers.”

Great writing! Americans have become so complacent and lazy that they are easily manipulated by shiny trinkets. Consumer cultism is pervasive and the urge to consume is overpowering. How else to explain the proliferation of Hummers on the highways during the middle of a war in the middle east ? How else to explain that people believe that they are supporting the troops by placing a yellow magnet on the back of their SUV, a magnet which was probably made in China in a factory that used to be in America? How else to explain why Americans have rolled over and let their country be jacked by crypto fascists with nary a whimper. We don’t care, as long as we have enough stuff to keep us endlessly distracted.
Posted by Mark at 11:43 AM

"Americans have become so complacent and lazy"--
Is consideration being taken to change the name of your blog's name from The Patriot to The Puritan? If people are indeed participating in the political process in a fashion counter to their own economic self interest, then this is a clear argument for egalitarianism rather than crass consumerism.

Advocating for a less consumerist society makes me a Puritan? Well, this country certainly has strong puritan roots.The right wing religious nutjobs certainly have no problem foisting a moralistic puritan ideology onto the backs of the workers while they pick their pockets to satisfy their own need for increased wealth. Surely you're not arging that Americans aren't spoiled, are you? There is no way to support that argument.