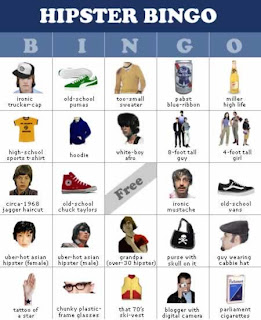 The appearance of the hipster in New York in the mid 1990s is probably related to the corporatization of the New York art and music scene which began around the same time. A fresh group of college graduates and mid-west transplants were confronted not with the seedy New York of the late 1980s and early 1990s but with a revitalized Times Square and the creeping influx of chain stores and place neutral advertising. The gentrification of Manhattan and the influx of nation-wide chain stores started to strip away the unique character of the City and replace it with the sort of non-descript middle-American consumerism to which the proto-hipsters were accustomed while growing up in places like DesMoines and New Jersey.

Since the baby hipsters were essentially devoid of originality and since New York was no longer capable of providing a sufficient muse to create a new scene, the kids were compelled to regurgitate past successful art and music accomplishments, drape them in irony, and proclaim them as new. That’s my theory anyway.

The pace of corporate devouring of the so-called “alternative” art and music scenes in New York has accelerated since the turn of the century, which has compounded the problem. As my anonymous friend indicated in a response to my last post, the closing of places with reasonably priced concert tickets like Tonic and CBGB’s and their high priced corporate replacements have limited access to performers and fans alike. Who can afford $60 to see a concert on a Thursday night? I think it's going to get worse before it gets better.
Posted by Mark at 10:35 AM

What we need is an economic downturn and spike in crime.

I bet it would stimulate creativity. Who creates good art when they're fat and complacent?

Pavarotti doesn't create art, he interprets other people's art. Not that there's anything wrong with that so long as you're upfront about it.

Lorentzen's main beef with
hipsters seems to be that
some of them have jobs and can afford nice apartments
in trendy neighborhoods. Yawn.
This argument is dragged out every few years when a particularsub-culture
gains mainstream popularity,
and is no longer isolated to pretentious coffee shop
employees and unemployed
cultural elitists. The hippies sold out, punk is dead, hipsters have day jobs -- so what?

All of it proves one point:
Lorentzen has no idea what cool is,
and has become -- more or less --
a grumpy old curmudgeon wistful
for his glory days
There will be another trend,another
subculture, another fad, and it will start amongst the broke, starving artists in the sketchiest urban neighborhoods, and
hipsters will become a thing of
the past. Then those kids will
get older, make more money, and
they will become mainstream.
Why Time Out is so surprised
by this phenomenon, and upset
by lawyers trying to be cool,
is completely beyond me.

The easy answer is that it's summertime and TONY needs to sell magazines. The whole article fits the very definition of a Troll. Nevertheless, this is also New York City, where complaining about one's fellow citizens has been elevated to an art form.