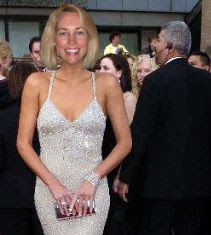 Does anyone else think that Valerie Plame-Wilson is kind of hot? I guess the CIA goes for that sort of fresh faced all American look in an under-cover operative. Probably not such a great look for the middle-east, but what the hell. And what did Plame actually do for the CIA anyway? Funny you should ask, Mr. Patriot: According to a September 6, 2006 article in The Nation by David Corn she was no mere paper pusher, but an operations officer working on a top priority of the Bush Administration in a unit of the agency focused on Iraq. Plame was recruited in 1985 after graduating from Penn State. After two years of training to be a covert case officer, she worked at headquarters at Langly on the Greek desk; she subsequently was posted to Athens where she posed as a State Department employee while engaging in her true mission; spotting and recruiting agents for the agency. In the early 1990s, she became a “nonofficial cover officer” (NOC). NOCs are CIA's frontline officers. According to Corn, “They do not pretend to work for the US government; they do not have the protection of diplomatic immunity. They might claim to be a businessperson. She told people she was with an energy firm. Her main mission remained the same: to gather agents for the CIA.”

In 1997 Wilson returned to CIA headquarters and joined the Counterproliferation Division and assigned to the Iraq branch. Now get this: in the summer of 2001, *--before 9/11--*word came down from the top office that they were “ramping up on Iraq.” Her unit was expanded and renamed the Joint Task Force on Iraq (JTFI). The JTFI was charged with interviewing top Iraqi scientists and defectors to determine the status of Saadam’s WMD program. In that sense JTFI’s mission was a complete failure; the few scientists it managed to reach insisted Saddam had no WMD programs. Remember this is all either well before the 911 attacks or shortly thereafter.

The logical conclusion to be drawn from the fact that the Bush administration was seeking covert intelligence on Sadaam Hussein’s weapons programs long before 911 is that the invasion was already a fait accompli and that 911 was used as an excuse to invade. This observation will of course surprise no one who lives in a state without a NASCAR track. Despite the fact that the JTFI couldn’t find a shred of evidence that Iraq even had an unconventional weapons program, never mind an impending “mushroom cloud”, the administration overtly lied to Congress (and the United Nations) about its pre-war WMD intelligence and manipulated the emotions of a fearful country so it could invade Iraq for its own twisted ideological reasons. I’ve said it before and I’ll say it again; lying to Congress is an impeachable offense. Unless the illicit reasons for going to war are given a full airing in the Court of public opinion the Democrats and Republicans will never reach a consensus on how to get out of the quagmire in Baghdad.

As for Plame, “as a CIA employee still sworn to secrecy, she wasn't able to explain publicly that she had spent nearly two years searching for evidence to support the Administration's justification for war and had come up empty.” Instead her cover was blown by the White House and she was left to twist in the wind; all because her husband tried to stop a corrupt and criminal administration from throwing American boys into the desert to die in Iraq for nothing but corporate profits.
Posted by Mark at 2:42 PM