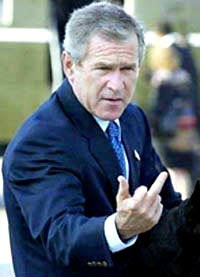 Spring has finally returned to New York after a most dreary winter. Hopefully I’ll be able to take JB out of the house this week since I think we’re both getting a little bit of cabin fever. Someone bought him a pair of wrap around shades which will look pretty cool when we saunter the boardwalk at South Beach. (That’s South Beach on Staten Island folks, not it's more well-heeled cousin in Miami.)

While the weather is improving here in New York, the Bush administration is facing an onslaught of political storms down in Washington which seem destined to last until the current White House occupants lurch across the finish line some 20 months hence. The consensus among the blogosphere is that Gonzalez is finished and that he’d be lucky to make it to Friday with his job, never mind his dignity, intact. I am less sanguine about the possibility of him jumping ship before “total victory is achieved”, however Bush presently envisions the term. Bush’s appointees are like New York City bedbugs; impossible to get rid of without the use of heavy industrial solvents. Since the only known alcoholic exterminator in Congress was recently run out of town himself, the task of fumigating the justice department falls to the democrats.
To that end, hearings are being held on the FBI’s recently discovered but ongoing abuse of the power to issue national security letters. “We're going to be re-examining the broad authorities we granted the FBI in the Patriot Act," Committee Chairman Sen. Patrick Leahy, D-Vermont, told Mueller. Mueller, in one of the odder arguments used to justify the evisceration of the Constitution urged the panel not to revise the law."The statute did not cause the errors," Mueller said. "The FBI's implementation did." "What I did not do and should have done is put in a compliance program to be sure those procedures were followed," the FBI chief added. If Mueller is accepting responsibility on behalf of the agency, shouldn’t his resignation be forthcoming? “Taking responsibility” for mistakes implies that the person taking said responsibility pay some sort of price for the error or omission. Not in this administration.

"I still have very serious qualms," Leahy replied. Yes, well, we all have serious qualms. What is being discussed at this hearing is a power granted by Congress in the Patriot Act for the FBI to snoop around in the underwear drawers of America extra-judicially based on an agent’s representation that the snooping is necessary for an ongoing investigation. In 2001, the Patriot Act eliminated any requirement that the records belong to someone under suspicion. Now an innocent person's records can be obtained if FBI field agents consider them relevant to an ongoing terrorism or spying investigation.

Anyone who has studied the law, heck, anyone who has ever watched an episode of Law and Order, knows that granting this kind of discretion to the FBI eviscerates the Constitutional protections granted by the Fourth Amendment. As snarlin’ Arlen Spector somewhat inartfully stated to Meuller in a rare moment of legal lucidity: “You asked for these powers; we gave you them. If these applications are wrong, you're subjecting people to an invasion of privacy that ought not to be issued."

Since the FBI is a DOJ agency, it can be argued that the ultimate responsibility for adhering to the Patriot Act lies with Gonzalez. He testifies on April 17th, if he’s still around.
Posted by Mark at 2:32 PM