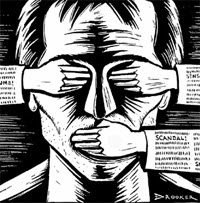 There’s an interesting article in Salon today about Ted Kaczynski, the so-called Unibomber and his fight to retain control over his manifesto and various other writings. One would think that under the First Amendment Ted would be able to maintain possession of his intellectual property, but convicted criminals rights are truncated by the government on a piecemeal basis, often reflecting whatever best suits the whim of the government in a particular case.

The legal issue presented is bigger than the Unabomber case but is hidden and minimized by the emotional reaction by the victims to the idea of Kaczynski maintaining control over his written work. The real question is whether the government gets the copyright when it seizes a prisoner's personal writings after a criminal conviction. Should the current litigation surrounding this issue answer the question in the affirmative, be on the look out for future government use of the precedent as a tool to bury the ideas of those it manages to convict under the various anti-terrorism statutes passed in recent years.
Posted by Mark at 11:02 AM